Martha’s Vineyard Hospital is bearing the brunt of a recent Covid-19 spike with the ‘highest virus patient activity’ it has faced since the start of the pandemic, two weeks after President Barack Obama’s 60th birthday celebration on the island.

The number of new Covid cases on the Vineyard has surged to 158 since the August 7 bash, with 87 new infections reported last week and another 71 confirmed this week as of Friday afternoon, DailyMail.com has learned.

Three patients are currently hospitalized with the virus, while a fourth is reported to be experiencing symptoms, and a fifth was airlifted to Boston in critical condition, the Vineyard Gazette reported Wednesday.

Of the four patients on the island, only one is said to be in serious condition, chief nurse and head of hospital operations Clair Seguin said in a press conference.

The hospitalizations mark the ‘highest amount of Covid-positive patient activity we’ve had since the onset of the pandemic,’ the health official added.

The number of new Covid-19 cases on Martha’s Vineyard has surged to 158 since President Barack Obama’s 60th birthday bash on August 7. Pictured: The Obamas poses with singer H.E.R., manager Jeanine McClean (far left) and another partygoer at the party 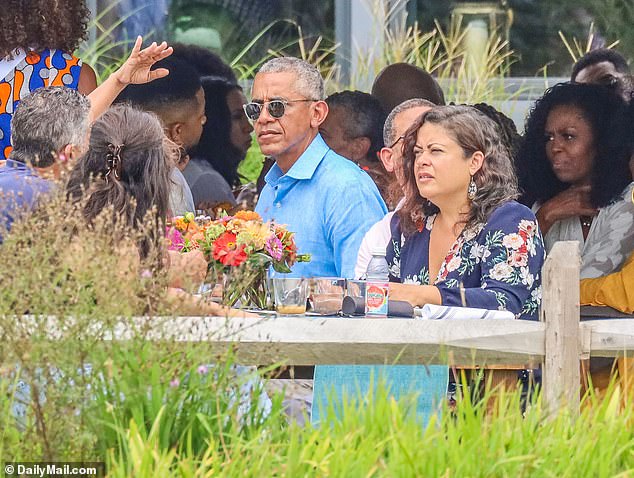 Obama is pictured on Sunday enjoying brunch beneath a marquee following his huge birthday party the night before. Another 71 Covid-19 cases were reported on the island this week as of Friday afternoon, in addition to the 87 recorded last week 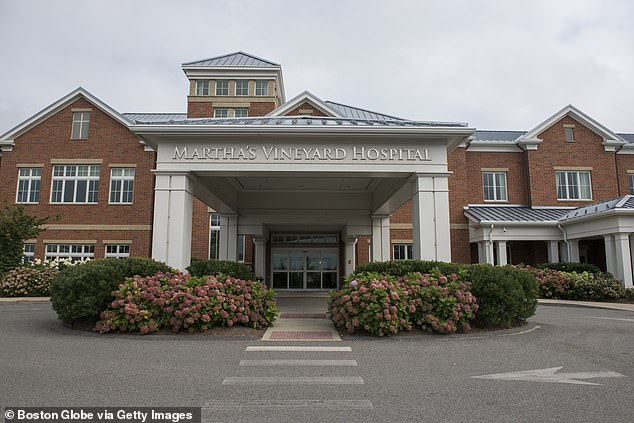 Officials at Martha’s Vineyard Hospital say the facility is seeing ‘the highest amount of Covid-positive patient activity’ since the onset of the pandemic, thanks to the surge in cases

Although the number of people hospitalized with Covid-19 is relatively low compared to other regions, officials say it comes ‘at a very busy time’ for the hospital – the only one in Dukes County – and it has put a strain on its emergency room.

The hospital had only seen a handful of Covid patients at a time for most of the pandemic. In early December it reported that it was treating one Covid patient – its first since Thanksgiving Day weeks earlier.

Health officials, however, say they have yet to see a link between the 158 recent cases and the maskless, star-studded event at Obama’s Martha’s Vineyard estate.

‘As of today I haven’t seen any cases linked to the Obama party,’ Tisbury health agent and boards of health spokesperson Maura Valley told DailyMail.com.

‘We still have contact tracing going on, but I think if there were cases popping up from the party we’d be seeing them already,’ she added.

She said there may be a chance health authorities could start seeing cases emerge from the celebration, but added that it is unlikely at this point.

Earlier this week, the boards of health in four towns on the island voted to reinstate mask mandates in indoor public spaces amid the surge, the Gazette reported.

The restriction would reverse officials’ decision to roll back Covid regulations in May when cases fell dramatically thanks to vaccination efforts.

It comes a week after DailyMail.com revealed at least 74 people had tested positive since the former president’s birthday extravaganza last Thursday – the highest number of new cases the Vineyard has seen in a week since April. 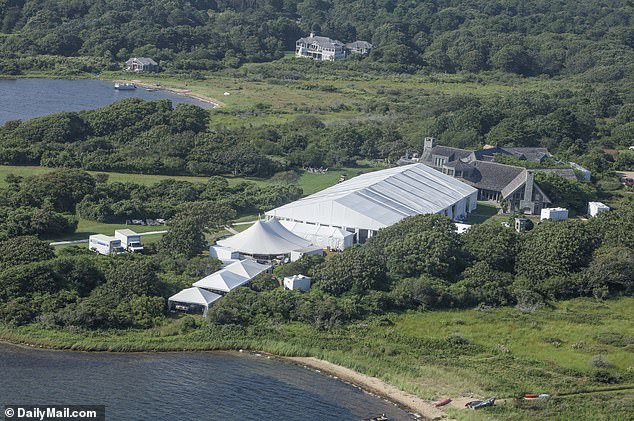 The former president had large tents erected over the property ahead of his bash. The spike in cases last week was the most the island had ever seen in a week since April 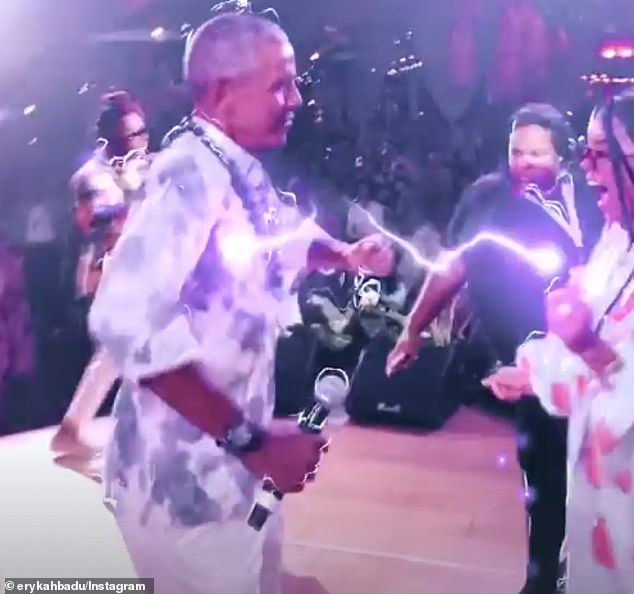 Hundreds of guests, including Hollywood stars, attended Obama’s birthday bash, flying in from around the country and congregating under tents where partiers danced, ate and drank the night away on his estate in Edgartown.

The night before the party, the president, who turned 60 on August 4, gathered with friends at the Barn Bowl & Bistro and joined a larger kick-off celebration at the luxury Winnetu Oceanside Resort.

He rounded off his birthday festivities with a brunch that Sunday at Beach Road restaurant, dining under a specially-erected marquee beside the water in Vineyard Haven.

Martha’s Vineyard was already experiencing a new surge in cases when Obama, preparing to welcome 500 guests to his mansion, announced his party would be ‘scaled back’ amid criticism as the Delta coronavirus variant spread across the country.

In the week leading up to his party, 48 new cases were reported on the island through Saturday, double the prior week.

The number of new cases has risen daily in the days after the event, with six on Sunday August 8, seven Monday, 10 Tuesday, 13 Wednesday, 18 Thursday and 20 on Friday the 13th.

But despite the ex-president’s insistence that he had disinvited everyone but his family and close friends, 300 to 400 people showed up to his party, everyone from Jay Z and Beyonce to Chrissy Teigen and John Legend, a staffer working the event told DailyMail.com.

Many of the guests flew in by private jet and stayed in Edgartown, the center of the island’s COVID resurgence. 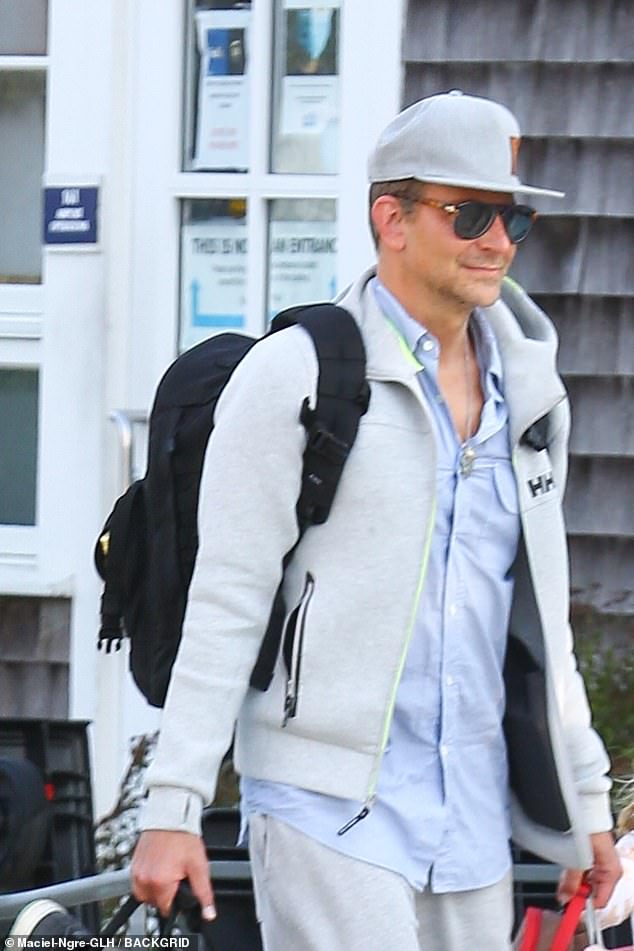 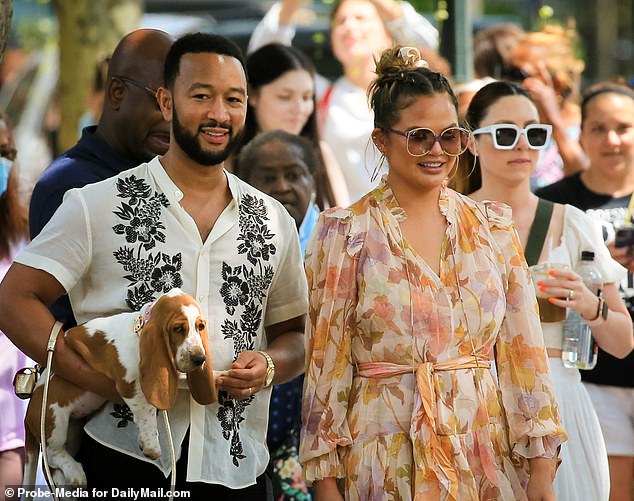 Chrissy Teigen and John legend attended the event, and were seen taking their family and nannies for a walk through the Martha’s Vineyard town of Edgartown

The Harbor View was among three new COVID clusters in Edgartown, along with the Alchemy Bistro & Bar with 14 cases, and Port Hunter restaurant with five, according to local health officials.

The latter two restaurants temporarily shut down, along with several other establishments including the historic Newes from America pub, the Wharf Pub and the Covington Restaurant in Edgartown.

Mask mandates have been reinstated at many bars and restaurants throughout the island.

Obama, however, insisted he was holding his guests and staff to a high standard. 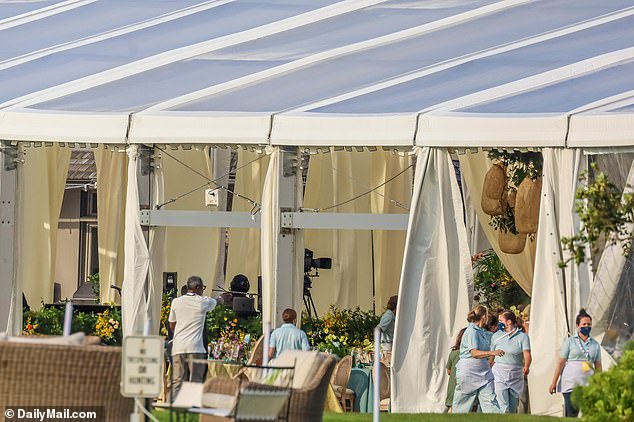 A ‘coronavirus coordinator’ was hired to make sure the party was compliant with the most recent CDC guidance.

Attendees were required to take tests and submit their results to gain entry to the compound.

But some of the island’s residents scoffed at the measures to create a COVID-free zone, given that partygoers were circulating between various events and locations, in a town raging with a Delta strain that spreads quickly.

Even vaccinated individuals aren’t immune. Of the 48 people who tested positive last week, more than half were vaccinated, according to health officials.

‘I wouldn’t have gone to the party even if I was invited,’ one resident of Edgartown, who had a friend working at the party, told DailyMail.com.

‘I’m sure some attendees went home with some extra luggage they didn’t pack or see. Stay tuned.’

Dark past of luxury family property at centre of Charlise Mutten...

Mumbai Man Booked for Cheating 10 People on False Promise of...

Covid travel restrictions and if you can go on holiday to...